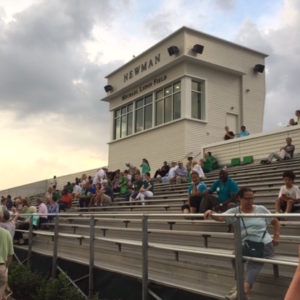 The Mannings led the fundraising and were joined by numerous generous donors from the Newman community, whose assistance was greatly appreciated. In addition to aesthetic improvements, the practicality of a new sound system was evident.

The Newman facility had a lot going for it, but its sound system was in need of a substantial upgrade,” said Mike Montero, owner of M.R. Montero Electronics, which was charged with installing the new sound equipment. “The original sound system had been a hodgepodge of old horns and a typical 1960 design which, at the time, was meant for just for voices only. The new system needed to cover the football field, the bleachers on both sides of the field, the pavilion area and the concession area, as well – and provide clear, focused sound for pre-game music as well as any announcements and game commentary.”

Montero chose the FBT Shadow 112HC series to cover the field, pavilion and bleachers. Several boxes were mounted several on the press box itself with 280 degree coverage. Two main clusters cover the field, with right and left clusters for the bleachers and another cluster for the pavilion.

“I chose FBT for this job because they perform extremely well, right out of the box,” said Montero. “There wasn’t a need for much adjusting or tweaking to get them to sound the way we wanted them to. They’re horn-loaded, which helps throw the sound across the field and you can’t beat the B&C drivers they use either. The boxes meet every challenge presented by a wide-open space with buildings on multiple sides that can be a real headache when it comes to reflecting sound. The waterproofing aspect was also perfect in this case, since they’re going to be used outside in all kinds of weather and need to last. I was especially impressed by the grill design and the material that the cabinet is made of: The waterproof fittings for the connections they use are all stainless steel hardware and the brackets they use make them easy to put up and angle.”

Montero, whose company does everything from live audio engineering and studio installations to component-level servicing of musical electronics equipment, is no stranger to providing high-quality sound in just about any environment. M.R. Montero Electronics is currently the preferred vendor for Margaritaville, and is responsible for their installations, globally. He’s worked with such musicians as Donny Osmond, Oleta Adams and Aaron Neville and was responsible for setting up all three of Daniel Lanois’ New Orleans studios, where the music legend produced Yellow Moon for the Neville Brothers and Oh Mercy for Bob Dylan.

“I’ve been blessed with experiences that have given me exposure to so many different crafts within the music industry,” said Montero. “Being a part of the renovations at Isidore Newman School has been equally rewarding. The staff at the school has been really happy with the end result because the sound is clear and natural, wherever you sit as a spectator now. Knowing that it’s all been supported by the Mannings and the generosity of other donors is a great feeling.”