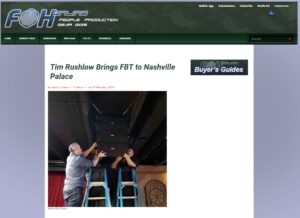 Tim Rushlow recently completed a residency at Nashville Palace with audio support from FBT to accommodate his 20-piece big band experience. Despite the challenges presented by the 600-seat space, including hard surfaces and various obstructions, Rushlow’s manager and show co-producer, Clif Doyal, credited FBT as a good complement for the band’s big sound.

“The sound was incredible,” said Doyal. “The clarity, the true voicing, the highs and lows the system captured and the throw and disbursement amazed me – and that’s really unusual for speakers in that price range.”

Tim Rushlow has sold 11 million records, won CMA and ACM awards, has three Grammy nominations and has been on eight world tours, so he’s earned the right to be

discriminating when it comes to the equipment he uses. The former voice and frontman for the well-known country group Little Texas recently came off of an eight-week residency at the Nashville Palace in Nashville, Tennessee.

To support the many sound requirements of his new act, a 20-piece big band experience reminiscent of a Las Vegas Rat Pack concert, he decided to use FBT. Despite the challenges presented by the space, Rushlow’s manager and show co-producer, Clif Doyal, said the brand was just what they needed to complement the big band’s big sound.