Leon Dwinga III, owner of Runaway Records Productions, LLC, has built a successful event production business on talent, technical skill and a reputation for professionalism when dealing with his many high-end and boutique clients. Recently, when he was asked to provide sound for one of those clients in Pittsburgh, Pennsylvania, he considered which equipment he’d bring to cover their popular men’s event to be held at the David L. Lawrence Convention Center. Armed with just a Muse 210 line array and additional FBT support speakers, he surprised even his own engineers by providing outstanding sound – supporting a full band and multiple presenters who addressed a crowd of 3,000 people in a 24,000 square-foot space. 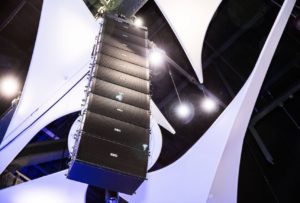 “This particular event – the Catholic Men’s Fellowship – is something we do annually, but this was the first time I’d brought FBT to the job. When one of my audio engineers, who happens to be the A1 for the Pittsburgh Penquins, saw that I was going to use two stacks of four boxes in a room that was 200 feet by 120 feet he was doubtful,” said Dwinga, “but only until he raised the fader 30 percent of the way, and then he was really impressed. I mean, that’s a big room and we needed to support a full worship band with drums, electric and acoustic guitars, keyboards, sax and flute – We’re talking about the full range of tones that you could possibly get in a live scenario. We had two stacks of four FBT Muse 210LAs, two of their dual sublines and two more each of their outfills and two small center fills. Not only did we cover the room accurately – the sound was just mind-blowing. As good as the speakers sound with music, they’re at home with the spoken word. They have one of the smoothest midrange responses I’ve ever heard.” Read more →