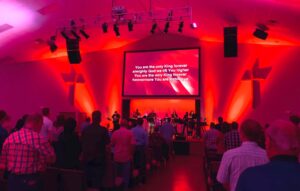 After reinforcing the ceiling structure, Saenz and his team tackled the sound system. To get even coverage throughout the room, they flew Muse 210A’s (five on each side) and then strategically placed four Subline 218 SA’s, spread out evenly under the stage. For front fills, Saenz used four Ventis 206A’s and, for wing fills and rear delays, they used Ventis 112A’s (one for each side of the church and a stereo pair in the back).

Saenz explained why he chose FBT, and the overall reaction during its first use in the new space.

“Having the opportunity to set up an entire FBT rig and be able to have a place to take clients so they can hear what the system can do was something that we really wanted to make happen,” said Saenz. “People are consistently impressed by FBT because the sound is amazing. Other brands in the same price range don’t typically impress me because the top end and mids can be very harsh – the vocals can be thin. With FBT, I get rich vocals and a rich, smooth sound. The separation of the instruments in the mix is just incredible.”

But even Saenz was surprised when his team first “fired up” the fully installed system.

“We use pink noise to tune the PA and the room once we’re fully set up,” Saenz added. “We also use various equipment that gives us visuals on how the sound is interacting in a given space. I was amazed at how even the sound was throughout the audio spectrum, without any processing. I even checked my equipment to make sure everything was set correctly because I kept thinking, ‘this can’t be right.’ We hadn’t tweaked them at all and they sounded incredible, right out of the box.”

BP Lighting, Sound and Video has over 25 years of experience in professional event production, rentals, sales and installations. In addition to covering the greater Texas area, they provide production support for events from California to Washington D.C., including production for AT&T’s overtime courtyard for the San Antonio Spurs and Willie Nelson’s annual Luck Reunion presented by Southwest Airlines.

“The definition and absolute articulation in the music is, in a word, incredible,” said Bencik. “Our church has a very immersive and contemporary Worship style. My tech and sound teams have been tuning and using these products for several months now and we are beyond satisfied. Frankly, at times we’re amazed at the difference… We here at Grace need big, big sound in our Worship ministries. These Speakers produce.”

“I would also like to give a shout out to the crew at BP Lighting and Rock River Media, Bencik added. “These guys did back flips for us. We had a very tight install window and they made it happen by working 15-, 16- and 17-hour days. The FBT products installed well and tuning was a breeze, both because of the quality products as well as the technical expertise on hand.”