Archive for the Press Category

When Craig Kruckeberg purchased a Minneapolis honkytonk in a building that was built in the 1800s, he faced a few challenges that would have stumped a lot of professionals. Thanks to FBT and Dave Bartholomew, sales manager and project manager of Allied Productions & Sales, a sound system didn’t have to be one of them.

Bartholomew, who has been in the audio business for over thirty years, says there were plenty of other reasons why he and his lead installation tech and rigger, Cody Anderson, chose FBT for the job.

“When you consider the bang for the buck… FBT is way better than any other product I’ve found. It gets tremendous output and the sound is impeccable. It’s louder than other brands, but it’s also more efficient. With the high SPL rating that they have, what their equipment will do at 500 watts, it takes other manufacturers 700 or 800 watts to get to that same level. The best thing is, though, when you read FBT’s specs, they’re spot-on accurate. Here in the states, a lot of brands seem to want to throw a lot of numbers around that don’t necessarily mean anything. They’ll always put what the peak output is instead of the RMS or the continuous rate, which is more useful.”

DJ Mike Sanchez takes his shows to the next level with Muse 210lLA loudspeakers and Q118SA subwoofers.

“My story is kind of funny,” said Sanchez. “Brian introduced me to John, who was busy with some bigger fish – you know, bigger clients than me – but he took the time to work with me and within a week I was placing my order…”

“We tried the speakers with the regular settings,” he said, “and they were definitely punchy. But I really wanted to push them to the limit to see what they could do. I knew I’d really want them pumping at an event, so we ran all four bases on the INFRA setting on the back and totally pushed the volume – Well the roof of the place was liquidating. We could have broken it down yet, at the same time, the sound was so crisp and focused…” 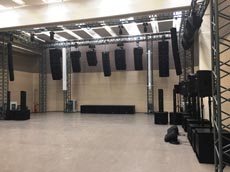 “The investment that we have poured into this facility has been quite high, and we have equally high expectations of how it will help us to reach out to our clients and our partners, both domestically and internationally,” commented FBT CEO Bruno Tanoni. “Our goal was to create a dedicated, wide-open space equipped with the most advanced acoustic treatment solutions available, allowing us to fully demonstrate why FBT products are so well respected all over the world. I am proud that we have achieved that.”