Archive for the install Category 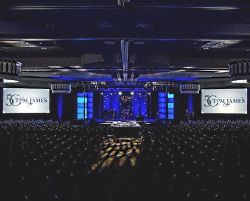 As a company that does live sound, installations and corporate events for notable clients, Myers Concert Productions (Murfreesboro, TN) has a variety of sound systems at its disposal.

Recently, however, DJ Myers, owner, confided that he’s been increasingly working FBT loudspeakers into his touring and corporate inventory.

While he lists cost and sound quality as two reasons for this change, he also says FBT’s Mitus 206la’s are exceptional at meeting the unique challenges that come with servicing corporate clients and tricky venues.

Prosound Web has the full article

Celebrations in the Indian community are serious business. Festivals are typically an unrestrained blend of color, flavor and sound. And weddings, according to George Fontes, managing director of Fontes Pro Sound & Light, are nothing short of high-decibel exhilaration. So, when Mirage, an Indian wedding and banquet hall in Sacramento, CA, contacted him to install a new sound system last month, Fontes turned to FBT. He knew anything he installed would be pushed to concert-level limits and he wanted to ensure crisp, clean sound at every event – wherever guests were standing in 22,000 square feet of space.

“There are several reasons I chose FBT for this job,” said Fontes. “One thing I love about the brand is that they don’t outsource; everything down to their amp modules is done in house. You just don’t find that anymore. All of that quality control proves that they really care about their products, and you not only see it –  you hear it.

We’ve literally taken FBT products within their respective price categories, and compared them to all the other major manufacturers that everyone knows and loves. FBT has always come out on top in build and sound quality. In some cases, I’d even say they’re underpriced, because performance-wise, they compare to products that cost twice as much.”

With a student body that includes children of Nashville’s resident musicians, high-quality sound is consistently needed to support school shows as well as the many performances given by parents – professional musicians who enjoy the opportunity to raise money for the school.

Read more of the article at ProSound Web

Technologies For Worship‘s article about how FBT, and Texas Systems have revitalized Fellowship Church’s audio for worship.

“We knew we needed to fix our audio, so we contacted Jim Martin at Texas Systems Integration to configure the perfect solution for our facility… He was able to recommend FBT speakers to us based not only on the price of the speakers, but also the quality of the sound from the speakers as well.

Our new sound system consists of a single-hang Mitus 206LA line array in the center of the sanctuary and two Vertus CLA 604a columns in both of the side rooms. With the Mitus line array, Jim was able to angle the modules within the array to different areas of the sanctuary and use the built-in DSP to enable the sound to reach each different area of the room at the same time, without echoing or bouncing off the ceiling or walls. The two Vertus CLA 604a columns are also positioned properly on the walls in the side rooms, and zoned via DSP, to create a seamless, clear sound for all our congregants, regardless of where they are sitting.”

When Craig Kruckeberg purchased a Minneapolis honkytonk in a building that was built in the 1800s, he faced a few challenges that would have stumped a lot of professionals. Thanks to FBT and Dave Bartholomew, sales manager and project manager of Allied Productions & Sales, a sound system didn’t have to be one of them.

Bartholomew, who has been in the audio business for over thirty years, says there were plenty of other reasons why he and his lead installation tech and rigger, Cody Anderson, chose FBT for the job.

“When you consider the bang for the buck… FBT is way better than any other product I’ve found. It gets tremendous output and the sound is impeccable. It’s louder than other brands, but it’s also more efficient. With the high SPL rating that they have, what their equipment will do at 500 watts, it takes other manufacturers 700 or 800 watts to get to that same level. The best thing is, though, when you read FBT’s specs, they’re spot-on accurate. Here in the states, a lot of brands seem to want to throw a lot of numbers around that don’t necessarily mean anything. They’ll always put what the peak output is instead of the RMS or the continuous rate, which is more useful.”